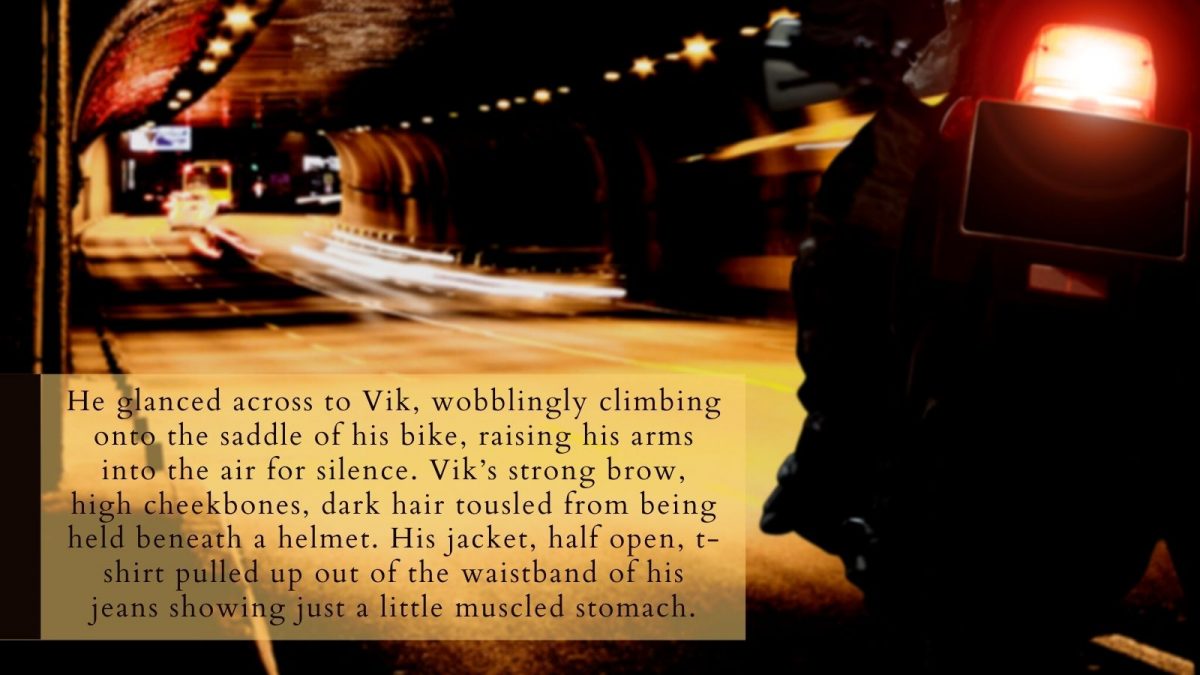 I know it’s been a little while since my last release. I’ve been really busy with work and life! But here’s a little (totally unedited – please be aware!) excerpt from the beginning of my current WIP to whet your appetite.

The smell of fresh tarmac after the rain assailed Roy’s nostrils, reminding him to slow down for the corner. The turn from Short Street into Exeter Avenue was sharp, and more than one rider had fucked themselves up taking it too fast, especially in bad conditions. He glanced in his mirror as he slowed, watching Viktor follow suit, slowing just a little earlier to try to take the inside route. Roy grinned.

“Not today, mate,” he muttered as he pulled on the throttle and felt the bike growl beneath him.

Speeding up, he stayed earth-bound over the first speed hump. Not so much the second. The motorcycle jumped into the air with a scent of exhaust fumes as Roy glanced behind and watched Vik closing the gap. It wouldn’t be enough. The other end of Exeter Avenue was in sight, then it was just a short run to the light traffic across the bridge and he’d be at the finish line.

Ten bloody grand. That was the prize money for tonight’s race. All or nothing, one winner and a dozen losers. Coming into it, Roy had been determined. Tonight would be his night. He and Viktor had been rivals for three years, the push and pull between them legendary, setting the London scene alight with unbridled testosterone. Vik had won the last two times they raced, putting him now three wins to the good, and that was unacceptable.

At the end of the avenue he jumped the pavement, the blare of a horn sounding in the night air as a car behind him slammed on its brakes. Another glance in the mirror and he saw Vik, his black and chrome beast rearing up on its hind quarters like he was some sort of knight in a medieval jousting contest. Vik raised his arm, and for a second Roy thought he was going to shake his fist at him, but instead he extended his middle finger to the car driver before slamming the front of his vehicle down with a growl of power.

“Fucking showman.” Roy laughed, swerving to dive between two SUVs, then leaning to the left and pushing the handlebars right, making a sharp turn onto the bridge.

A little crowd of onlookers had gathered on the other side. Girls in leggings that hugged their arses, short skirts that displayed long legs. Boys in leather jackets and loose jeans, tight black vests that struggled to stretch across slabs of pectoral muscle. Roy didn’t care about any of them. He didn’t care about the risk of the police catching him or the danger to himself or anyone else who dared to share his stretch of twilight tarmac over the river.

All he cared about was right there, ahead.

He was so intent on it, he didn’t even notice that Viktor had closed the gap between them, that there was now barely anything separating first and second place. He concentrated on his own race, pulling the throttle as hard as he could, milking every last ounce of raw power from his engine.

“Nice try, love,” he heard, and turned his head.

Viktor laughed, his visor pulled up so that he could wink at Roy. Then he swerved right as Roy swerved left, both avoiding the same Honda Accord, and somehow the bastard was ahead. Roy pulled on his throttle, but the bike had nothing left to give. Viktor had done something to his ride, tuned it up somehow, that had to be it. There was no other explanation.

But it didn’t matter about excuses. All that mattered was who came in first.

They crossed the finish line almost neck and neck, but almost wasn’t good enough. It was one winner and twelve losers. He watched Viktor grinning and laughing, pushing away the attentions of girls and boys alike. But he wouldn’t stay to see him handed tonight’s purse. That was a step too far.

Frowning, he turned away and almost ran right into some girl he’d seen hanging around before. Nina? Meena? Fuck, what did he care what she called herself? Instead of apologising, he pushed past her, using his size and strength to easily brush her aside.

“He doesn’t deserve this,” she said behind him. “You won tonight. I saw. You crossed the finish line first.”

Roy stopped and turned, took in her little waist, her wide eyes, her heel-enhanced posture. Time was, he would have taken her home and angrily screwed her just to get over what had happened, but not tonight. In all honesty, he wasn’t even a little bit attracted to her. He glanced across to Vik, wobblingly climbing onto the saddle of his bike, raising his arms into the air for silence. Vik’s strong brow, high cheekbones, dark hair tousled from being held beneath a helmet. His jacket, half open, t-shirt pulled up out of the waistband of his jeans showing just a little muscled stomach.

“That prissy prick doesn’t deserve any of this,” the girl said, and Roy’s eyes moved back to her, remembering suddenly that she was there. “If he didn’t have his money, he’d never beat you. We can all see that.”

“We who?” Roy asked, narrowing his eyes.

“Everyone. Everyone who watched the race tonight knows that you’re the better rider.”

He pointed behind her, sweeping his hand over the crowd that was hanging on every single word that came out of Viktor’s mouth. “Everyone, huh?”

Roy laughed, shaking his head, then turned away, making for his bike at the side of the road.

The words rang in his head.